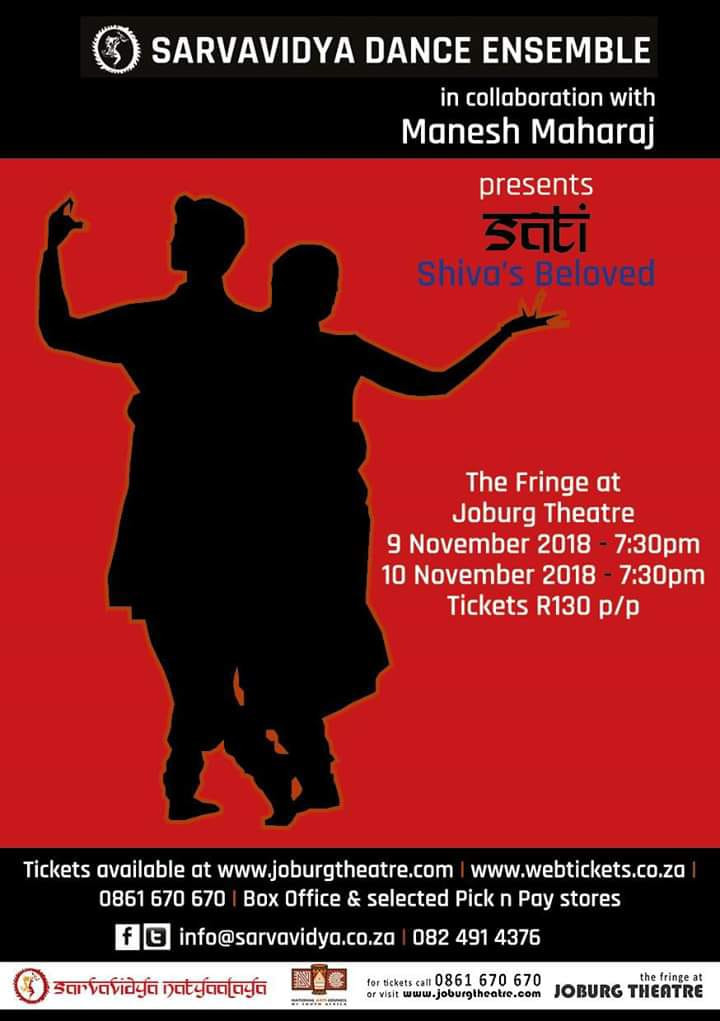 SATI - Shiva’s Beloved, the latest production by Sarvavidya Natyaalaya is a collaborative project between the Sarvavidya Dance Ensemble (SDE) and Manesh Maharaj - artistic director and founder of Kala Darshan Institute of Classical Music and Dance. The aim of this production is two fold as it delves into the collaborative possibilities of two different classical Indian dance styles in South Africa i.e. Bharatanatyam and Kathak, and it is a narrative exploration of the Hindu mythological story of Sati and Shiva.

Through the collaboration we have aimed to find common ground between the two styles, which historically are tied to the South and North of India respectively (which means both a difference in stylisation as well as music), to create fluidity in choreography and movement, eventually leading to an experience of dance that is not fixed in either genre.

The narrative unpacks the love story of the characters Sati (who is believed to be an earthly incarnation of the all powerful feminine energy – Adi Parashakti) and her male counterpart Shiva (who is most often understood to be the detached and destructive masculine principle of the universe). The story, as told through this production, plays between the mythological and real, the feminine and masculine, and the spiritual and human. The humanising of these characters aims to make them more relatable and also bring the mythological to the present. Their story begins with the birth of Sati and unfolds into a journey of love, loss, and eventual destruction. The underlying thread plays between the human and the spiritual. The coexistence and equilibrium of the feminine and masculine principles or Shakti and Shiva is shown through these characters who are equally strong in mind and as dancers – dance becomes metaphoric of their immersion in each other. They are believed to be in a state of constant union and equilibrium, either as lovers or as energies that merge to become one being which is half female and half male – where one cannot exist without the other.

Join us for this storytelling through dance of Shiva and his beloved named Sati.