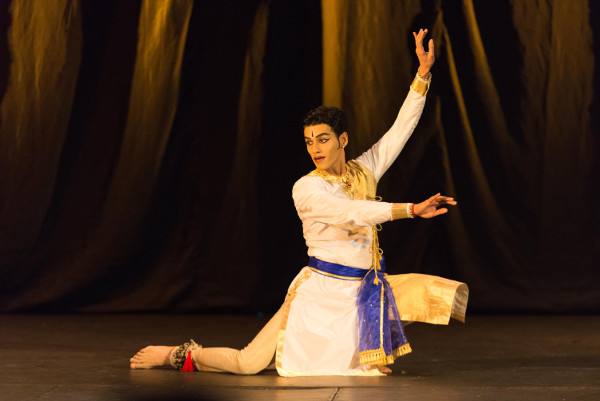 AvAhan – a solo Kathak performance by Shri Manesh Maharaj invokes the cosmic energy of 5 deities in the Hindu pantheon namely GANESH -The elephant-headed God who removes obstacles, DURGA -The warrior Goddess & destroyer of demons, SHIVA – The Lord of dance, RAAM – The handsome hero of the Ramayan & KRISHNA -The mischievous flautist.

The dancer takes on the role of the Bhakta (devotee) who transports his audience on a spiritual pilgrimage as he propitiates each deity, connecting their divine energies with the viewer. AvAhan brings to life the age-old tradition of story telling by Kathakars (story tellers) who travelled the land bringing the glory of the Gods to the people & leading them towards a righteous path in the process. The salient features of kathak such as pirouettes, footwork & the complexities of rhythm are meaningfully interwoven into the evocative expressions or Abinaya which presents an interesting blend of the technical as well as the interpretative. AvAhan is a 65 minute presentation set to melodious Ragas, vibrant Talas & accompanied by a descriptive narrative. Its rich music score & innovative choreography make it appealing to a diverse audience.